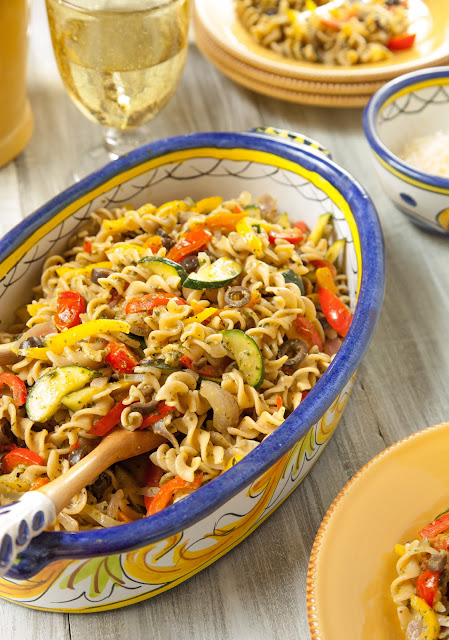 The making of this pasta reminded me a little of a dinner I prepared for our youngest daughter and some of her college friends a few years ago. It was planned amid the aisles of a grocery store, would have to cover a range of tastes and eating habits and, ironically, also involved a daughter... only this time it was our eldest.

Like that dinner long ago, I had decided on a general plan. A big pot of Tortilla Chicken Soup for that college crowd; a pasta for this past weekend's crew. No problem.

But... like so often is the case now... not everyone eats everything.

That big pot of Tortilla Chicken Soup I made back then quickly became two pots of soup, with a savory black bean soup added to accommodate the vegetarians and vegans in the mix, and a salad slipped in to appeal to the dietary restrictions on all sides.

This past weekend, pasta was requested. However, with a fairly happy meat eater in our mix, a vegetarian (sometimes pescatarian) that wanted heavy veggies, a couple of chicken-only-every-so-often eaters, and a no-or-very-little-dairy-in-the mix need... we started our plan in the produce aisle. Before we bagged one veggie, we decided our pasta would be pesto-based. The pesto would give a good deal of flavor and a little cheese-satisfaction... without a dairy overload (or if you make your own, you can leave the parmesan out... I can't believe I'm even typing that). In any case, veggies that appealed to all in the group were then selected (shopping as one force, as you do): zucchini, grape tomatoes, red onion, and three types of bell pepper (red, orange and yellow). Sliced black olives were thrown into the mix for a pop of salty flavor. A good, packaged basil pesto was selected. And, on the first go-around of this pasta, both chicken and shrimp were collected to add in a bit of protein on the side.

Like that collectively inspired dinner long ago, it worked. 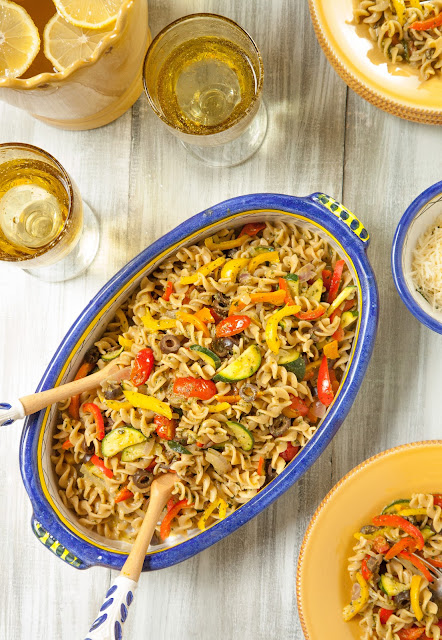 This pasta is a great, flavorful dish to serve alone or with a side of meat or fish. It would even be great with some chickpeas or kidney beans if you're looking to incorporate a little meatless protein to make it a more rounded, one-dish meal. Or, serve it up just like this... all on its own.

While I used one, 6-ounce container of pesto, more or less can be added to suit your personal liking. And, I specify cutting the vegetables to mimic the size of the pasta. It tastes the same however you slice it... just cut uniformly to ensure even cooking.

14 ounces whole wheat fusilli pasta, or pasta of your choice (I used Whole Food's 365 brand which is a 100% whole grain wheat product)


Heat water for pasta and cook according to package directions. Add a little pinch of salt to pasta water and check pasta at 6 to 8 minutes to result in an al dente firmness. Reserve 1/4 cup pasta water, drain pasta. Set aside.

In a large skillet (that can accommodate veggies and, ultimately, the pasta), heat 2 tablespoons olive oil over moderately low heat. Add onions to skillet and sauté, stirring occasionally, until they are nicely softened, about 8 to 10 minutes. Add another 1 tablespoon olive oil to skillet and drop in all the peppers and zucchini. Turn heat up to medium low, add salt and pepper, and sauté until veggies are cooked through bit still firm, about 6 to 8 minutes. Add reserved pasta water, olives and tomatoes to skillet. Add another pinch of salt to lightly season tomatoes. Sauté until just heated through, about 3 minutes. Add pasta to veggies in skillet, along with veggie broth and pesto. Mix thoroughly to combine and heat through for another 3 to 5 minutes. Drizzle with another little bit of olive oil, if preferred, and season with salt and pepper, to taste. Serve immediately.