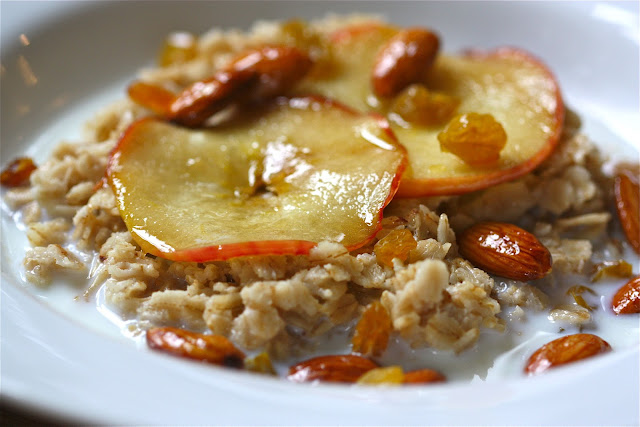 Oatmeal is our go-to breakfast on most mornings and, quite surprisingly, something we never seem to tire of.  I think this has to do with the fact that oatmeal is such a great canvas for interesting and flavorful toppings and sweeteners. Whether it's cinnamon-laced, popped with a nutty crunch, or piled high with fresh fruit... this little morning mainstay provides a nutritious foundation for a variety of toppings.

Though certainly not something I would ever consider a "recipe,' per se, I did happen upon a most beautiful webzine this morning, titled A Little Relish, and in it came across a recipe for Maple Porridge with Grilled Apple and Almonds. It's really all the flavorings I tend to gravitate to, adding fresh apple, chopped almonds, and golden raisins to my bowl most mornings. Yet, I seldom take these additions that extra step... like I tend to think of doing with dinners and most savory meals. With just a little sweetened sauté of apples and almonds, this little bowl of oats takes on many of the warm, satisfying flavors of apple pie -- buttery caramelized apples, glistening brown-sugared almonds, sweet golden raisins, and a hint of cinnamon.


Prepare old-fashioned oatmeal according to package directions; add sprinkle of cinnamon to pot in last minute or so of cooking.

Meanwhile, melt butter in a large skillet over medium heat, add brown sugar. When sugar is almost fully incorporated with the butter, lay apple slices in pan, coating one side slightly before turning and allowing to cook for approximately 2 minutes. Flip slices again and add almonds, tossing with sugar mixture to coat. Continue cooking until apples appear slightly caramelized and softened, about another minute or two.

Plate oatmeal, lay a few apple slices over top and sprinkle with some almonds and golden raisins. Return skillet to heat, add 1 teaspoon water to deglaze pan. Remove from heat and drizzle bowls of oatmeal with a little of the pan syrup. (note: I think deglazing pan after you remove the fruit and nuts will prevent the nuts from becoming soggy or losing their beautiful sheen.) Finish with a some warm milk, poured just around edge of oatmeal. Serve immediately.