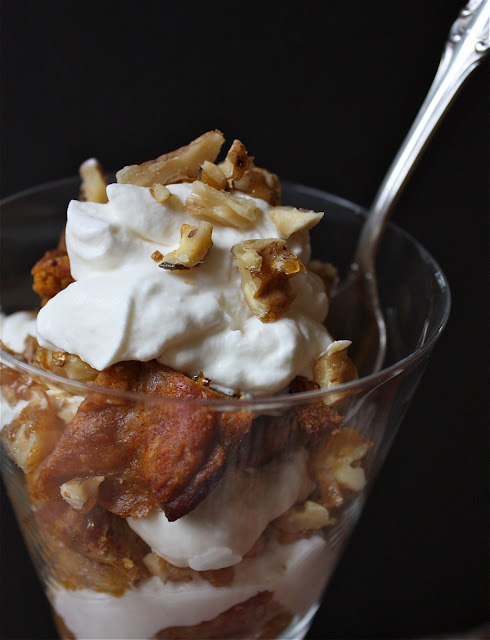 I spent the morning before Thanksgiving this year making two swings out to the airport, contented with the accompaniment of Mario Batali and Rick Bayless.  The conversation, as would be expected, centered on the holiday meal... the ins and outs of getting a great turkey on the table, new twists to traditional sides, etc. It was thoroughly enjoyable and thought-provoking. The fact that these masters of cooking traveled with me via satellite radio is but a minor detail.

The important point here is that I came away from this listening experience questioning whether I have been playing it too safe with my holiday meal. I had, over the years, come up with a set menu... a compilation of our favorites. And yet, after listening to the milieu of dishes being served up by the callers into this morning program,  I desperately wanted to join their ranks... throw something new into our treasured line-up.

Being one that leans more toward the savory than the sweet, I figured the dessert course was a safe place to mix things up and a bread pudding just seemed like a perfect way to reconfigure our traditional pumpkin pie. The primary flavor component remains true to the season, yet the versatility in plating allows for a more festive offering. Basically kicking pumpkin pie up a notch (or two).

While many bread puddings use breads like challah or brioche, I chose to go with a cinnamon-swirl bread from a local bakery. This bread has a similar density to that of the two more traditional choices, yet with the added benefit of a bit more flavor. Given that it wasn't day-old, as is fairly common in bread puddings, I cubed the bread, tossed it with a bit of melted butter, dusted it with a little more cinnamon and brown sugar (believing there is never enough of the "swirl" to go around), and toasted it in the oven for about 10 minutes before adding in all the other ingredients and popping the whole thing into the oven to bake.

The pudding can be cut into squares and plated with a simple dusting of powdered sugar... or elegantly stacked and then dusted. It can be placed on a puddle of cream anglaise (melted vanilla bean ice cream, in our case) and dolloped with some sweetened whipped cream.

Or, as shown here, cut into cubes and layered in a glass with sweetened whipped cream and candied walnuts. (Though this might look like a more decadent offering, it's truly just the same square of pudding, cut into cubes.)

Regardless of how it's presented, it's a great holiday treat... a perfect finish to a great dinner.