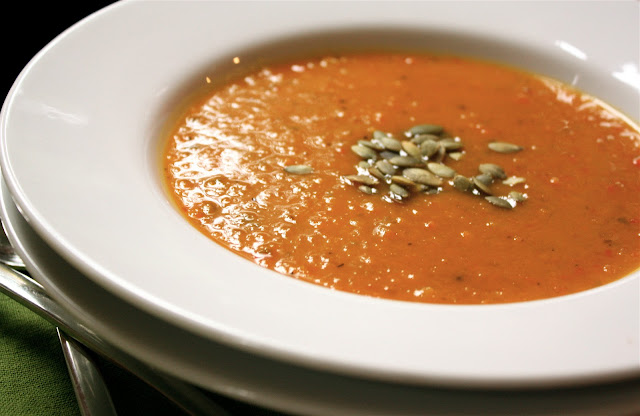 The hardest thing I encountered in making this soup was coming up with a simple title. It's not really just a Roasted Butternut Squash Soup... as all of its components play such an important role in its success. It's more of a Sum-of-Its-Parts sort of soup. (Now that sounds enticing.)

It was inspired by a conversation I had with a friend last week after a late afternoon walk on what was probably the prettiest day of fall. 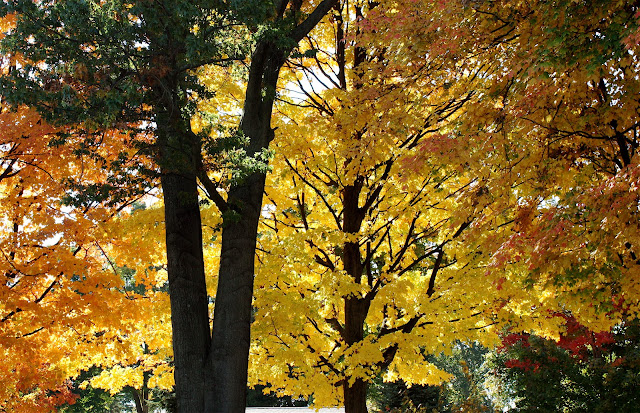 She was having leftovers for dinner, namely a butternut squash and red pepper soup. I liked the idea of combining those two flavors. Thinking of a soup I posted a while back, I decided to include a bit of apple for sweetness... and, of course, red onion. I tend to include red onion now whenever I roast butternut squash. I love how it sweetens up and chars just a bit, mellowing its bite so that it melds more fluidly with the squash without overpowering it.

Believing that both the red pepper and red onion would work to ground the soup, and the apple would impart a lighter note, I wondered how a jalapeño pepper might contribute. Seeded and cored I knew it wouldn't be too hot. And, once roasted, would likely give the soup a subtle, smoky undertone of flavor.

Everything gets tossed onto a sheet pan, drizzled with olive oil, salt and pepper and popped into the oven to roast for 20 to 25 minutes. I'll admit here that I accidentally grabbed a bottle of balsamic vinegar instead of olive oil and drizzled about a tablespoon of it over the veggies before I realized my error. Though I don't think you can pinpoint this flavor in the soup, I think it's a mistake I'll make again... not wanting to mess with a good thing. I also sequestered the chopped jalapeño off to one corner of the sheet pan, not fully committed to using it. However, about half way through roasting I knew it would make the cut. Given the amazing aroma it was adding to the mix, there was no denying the flavor it would provide. 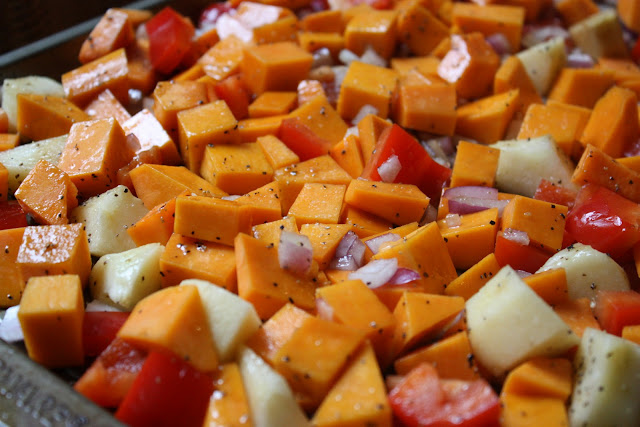 The greatest thing is everything comes together in minutes... especially since I bought a container of pre-diced fresh squash. After a quick chop and roast, it's virtually done.

Once out of the oven, the whole lot gets dropped into a food processor, along with two or three cups of vegetable broth to help get it all broken down. Then, once fully puréed, you just transfer it to a large pot set over medium heat, add the remaining broth, and warm it through.

Wanting just a little extra something, I added a good teaspoon of curry powder into the soup. This last little addition is what put it over the top for me. It gave it just the right sweet-savory balance... with an added little kick of warmth. Not a wallop, just a good little pop that gets your attention in the nicest of ways. Then some toasted pepitas sprinkled over top add a perfect little nutty crunch. 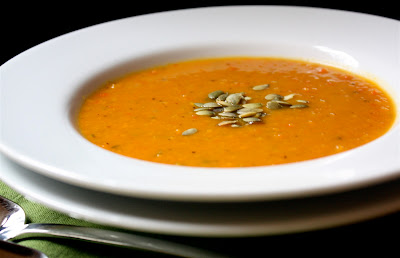 In a small skillet, lightly toast pepitas. Ladle soup into bowls, sprinkle with pepitas and serve.