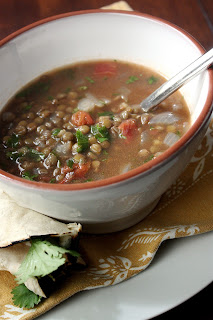 This soup has been in our family for nearly 25 years, give or take a few, and happens to be one of "our" favorites. Given that it's basically legumes and water it may seem like a bit of a stretch to offer it up as a bona fide "recipe." However, because it is so representative of just how good something so incredibly simple can be, it deserves a nod.

We distinguish this lentil soup from others I make by simply referring to it as "lentejas," which I suppose is apropos given that this is basically a meal of lentils. Unlike another favorite lentil soup I make that is far more hearty and rich in flavor, this soup is especially unassuming in its simplicity. Though I make it throughout the fall and winter, I'd say it is particularly nice as a transitional soup; one that welcomes you into fall and the onset of cooler temps and crimson leaves... with a gentle nudge.

Having said all that I have to confess that I mentioned this soup to our eldest... as part of our usual check-in on how the day went/what's for dinner routine... and she said it wasn't her favorite. Huh? Not a favorite? That's okay. I'm not sure I can say that everything I enjoy eating is my "favorite" but I still wouldn't toss them aside with nary a second look. So... while respecting her opinion (she loves the aforementioned soup), I'm posting it anyway as a mother's prerogative. It's super fresh, nutrient-rich, easy to make, and just about as cost effective a meal you can imagine... so it's a great option to have in your repertoire. 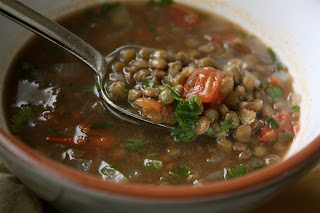 It features brown lentils, which are a bit firmer than their lentil brethren so they hold up nicely as the key player here, retaining their shape and substance. These lentils have a uniquely subtle, mild earthy flavor. I happen to love them, which I have to admit is somewhat critical to appreciating this soup. The simplicity of flavor offered by the brown lentil contrasts nicely with the more gently robust, herb-y and acidic notes of the onion, garlic, cilantro, and tomatoes that make up the balance of the stock. A bay leaf tucked into the soup as it simmers, along with a generous sprinkle of salt and pepper is all that is needed to make this less-than-glamorous but highly nutritious legume really shine.

Given the protein-packed richness of the brown lentil, this soup is a great option as a meatless, vegan-friendly meal. We, however, often pair our bowls of soup with some warmed tortillas dotted with fresh cotija cheese. You can also tuck in a few sprigs of fresh cilantro if you like. All in all, it's a super simple, fresh, and satisfying cooler-weather kind of soup/nudge (...nudge).


The Simplest Lentil Soup
makes about 8 to 10 cups

Heat olive oil in a large dutch oven or pot over medium heat. Add onions and sauté until just translucent, about 2 minutes. Add garlic and cook another minute longer. Add dry lentils, water, canned tomatoes, and bay leaf. Heat through and season with salt and pepper, to taste. Reduce heat to simmer and continue cooking until lentils have softened, about 30 to 45 minutes.

Suggestion: Heat white corn tortillas over a low gas flame until just lightly browned at edges. Sprinkle bits of cotija cheese over each tortilla, along with a sprig of fresh cilantro, and roll up like a taquito. Serve alongside soup.