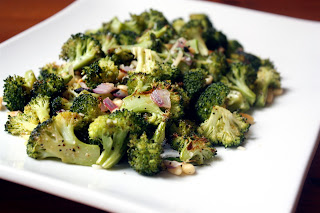 Growing up I would say I liked vegetables just about as much as the next kid. And, like most, had several on a short list of ones that I would have done just about anything to avoid eating. Though I have openly admitted my youthful disdain for brussel sprouts, I'd say that broccoli was a very close second.

As I recall, this particular veggie came sealed in a plastic bag and was pulled from the vast depths of a freezer that was often in dire need of a good defrosting. Given the fact that microwaves were all the rage at the time, our veggie side could magically transform from a colorful block of ice to a dinnertime side dish in just a few short minutes. Popped into a dish, slapped with a pat of butter and a few shakes of salt and pepper and we were good to go... all components of the food pyramid rightly accounted for.

It wasn't until much later that I realized just how much better fresh broccoli tasted and, just as important, that I liked my veggies to retain a whole lot more of their original character than a zap in a micro or a long soak in a hot bath or steam could possibly produce. And, surprisingly, time didn't have to be compromised. After a quick blanching... two to three minutes tops... these brilliantly green florets can be drained, dressed, and delivered in a dash of time.

And, then, as if it couldn't get any easier or better, I discovered roasting...

Cauliflower florets drizzled with a little olive oil and a sprinkle of salt, pepper and parmesan cheese... crazy good. Parsnips... red onions... sweet potatoes... tomatoes... you name it... awesome. There is just something magical that happens to veggies when they are roasted and so little is required to achieve success: a good dicing, a little olive oil, some seasoning, and voilá. Pungent flavors, bitter notes, strong odors... whatever the malady... roasting just seems to mellow, sweeten and beautifully transform veggies into a better form of themselves.

While it doesn't take much to make roasted veggies pop, I was particularly taken by this little recipe from Ina Garten. I've only slightly tweaked it -- as I made it the first time out from just what I could recall her doing. It's just a basic little roast but it's got this genius bit of topping that you mix into your veggies once they've come out of the oven. 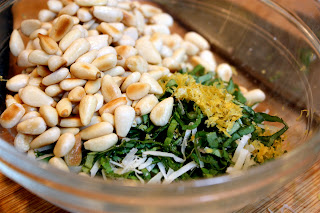 Super good, super easy... a little bit more dressed up... and definitely tasty enough for even the most critical of critics.


This recipe differs just slightly from that of The Barefoot Contessa. I've added red onion to the mix of broccoli to roast. Additionally, I found that roasting at a slightly lower temp (400 degrees F.) and for just a little bit less time works great for me. The broccoli gets a wonderful, slightly golden tinge to it without totally losing its crunch, and the onions sweeten and caramelize to a delicious goodness. Also... I don't add any additional oil to the veggies once out of the oven. (I just don't think they need it.)

Preheat oven to 400 degrees F. Arrange broccoli florets and diced onion on a large sheet pan. Drizzle with olive oil, salt, and pepper. Toss to coat and arrange in a single layer. Roast in oven for approximately 15 to 20 minutes. Check after 15 minutes and remove from oven when broccoli looks just slight golden tinged. Set aside.

* To toast pine nuts, place nuts in a small skillet over medium heat. Toss intermittently and watch closely. After about 2 minutes, nuts should begin to show a little golden hue. Promptly remove from heat as they will burn quickly.