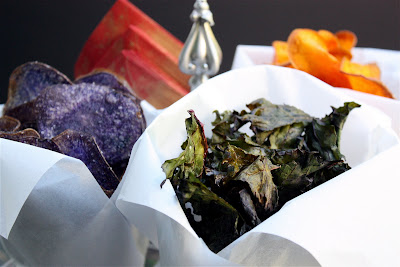 Potato chips are a rare offering in our home. Though we might grab an occasional bag to enjoy along with a sandwich at a deli or café, it isn't often. And it has nothing to do with being highly disciplined. On the contrary, lack of discipline governs this choice.
That being said, I am a firm believer in the value of moderation, so making homemade chips to offer up as a nibble is a perfect compromise... with nibble being the operative word.
Given the recent popularity of kale chips (blogged and blogged about... and now bagged and in stores), I figured I'd toss these in with my favored tater variety. And, while you can go with traditional russets, the vibrant coloring and delicious flavor of purple potatoes and garnet sweet potatoes (also called red yams) make a far grander offering. 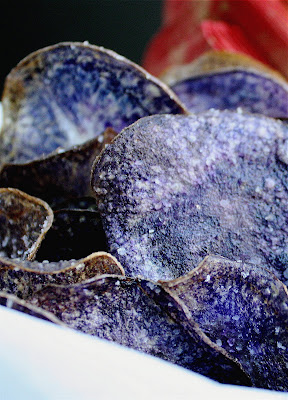 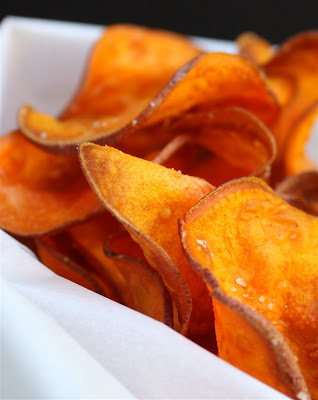 Though you can use any variety of kale, I selected curly kale thinking it might make a nicer looking chip. And while I do believe it does, it is also a variety that is slightly more bitter and earthy in flavor than others. As a result, the chips still retain some of this flavoring... not a bad thing necessarily, but one that might get me to substitute the sweeter lacinato kale the next time around.
The fun part of making kale chips is they are just so easy and require very little olive oil and salt. And they are baked not fried. Surprisingly, after just 20 minutes they are done and very crisp. They are also incredibly light and airy... almost fragile. So much so that they kind of just melt in your mouth.
While we "liked" the kale chips, they weren't a huge hit... and definitely would not trump a true potato chip. They are, however, a fun offering in a novel sort of way. They also keep really well stored in a zip-lock bag though I ended up crunching our leftovers into a kale seasoning which, according to one of the blogs I follow, tastes great on fresh popcorn. (This is, however, the same blog that touted kale chips as being insanely delicious so I'll reserve judgment, for now.)
The potatoes, on the other hand, were a big hit. First of all, they are beautiful. Both varieties I used fry up really well. Though there are varying opinions on the type of oil best for frying, I use canola oil and find it works just great. With slicing being the hardest part of this easy nibble, I'd highly recommend using a mandolin slicer. It powers through this chore and results in perfect, whisper-thin potato slices.
As far as seasoning goes, potato chips require a bit more generosity where salt is concerned. I happened to use a fleur de sel on my kale chips, but sparingly so. A little goes a long way and can easily overpower these delicate wafers. Unlike potato chips, kale chips get salted before going into the oven. Potato chips should get a good sprinkle right after they get pulled from the fry pot to drain. They'll accept the seasoning far better when they are still warm.
Though these chips were made as a nibble, we did have a few leftovers. Both kale chips and purple potato chips will keep well stored in a zip-locked bag... though I think best consumed in a day or two. Sweet potato chips, however, tend to lose their crunch once bagged (at least mine did) so they are best consumed at once. And if you lack any discipline, consider bagging leftovers for guests to take away... far, far away. 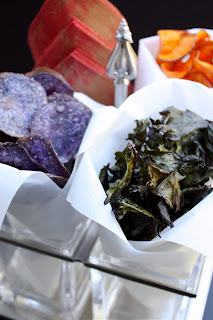 easily serves 6 to 8, as a light nibble
If you aren't a complete fan of the kale chips, try crunching them up (right in a zip-lock bag) and use them to season hot popcorn. Substituting kale-seasoned popcorn (perhaps with a little added parmesan cheese) would work equally well in this presentation.
1 bunch curly kale, washed and dried (center stems removed and discarded) and torn into bite-size pieces
1 tablespoon olive oil
1/8 (or less) teaspoon salt (I used a fleur de sel)
1 large garnet sweet potato, cut into very thin slices
3 small to medium purple potatoes, cut into very thin slices
canola oil, for frying
kosher salt, to season
1. Preheat oven to 300 degrees F.
2. Place torn kale leaves in a large bowl. Drizzle with olive oil and sprinkle modestly with salt. Toss with hands to combine. Transfer kale to a large baking sheet (or two) and separate leaves so that you have one roomy layer. If the kale is too crowded, it won't crisp up as well and will tend to stick together. Roast for 20 minutes; remove from oven and set aside to cool.
3. Meanwhile, pour a 2-inch depth of canola oil in a large, heavy pot, placed over high heat. Using tongs, dip one potato slice into hot oil to test readiness. If it sizzles, you are ready to get started. Again, using tongs, carefully drop potato slices into hot oil without overcrowding pot (as overcrowding will reduce the heat of the oil). The potatoes will sizzle quite robustly at first, but will start to calm a bit as they fry up... taking 15 to 30 seconds, depending on the temperature of your oil. Using a slotted spoon or tongs, carefully remove fried chips and set aside on paper towels to drain. Season each batch generously with salt as you go along (they will hold the seasoning better while still warm). Continue process until all potatoes are fried.