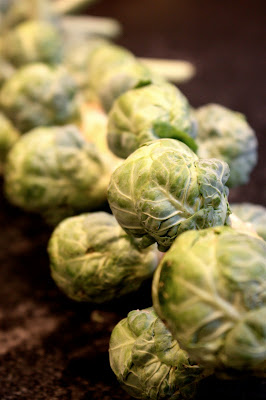 Out to dinner a few weeks ago, our group's conversation touched on many topics over the course of almost three hours but got quite lively and animated when it finally zeroed in on Foods We Hate. Talk about reverting to childhood!
It seemed everyone at our table had at least one food item (some had several) that they had forever relegated to the I'll-never-eat-that-again file. The items were varied but largely from the veggie category. The reasons were also varied (and, of course, subjective) but the most common were: poor preparation, an offensive aroma and/or consistency, and the dreaded memory the food evoked. Mind you, all the dreaded memories seemed quite benign once they were related to the group: long car trips and winding roads (enough said) to unfavored aunts and, thus, unfavored opinions of whatever said aunts made (again...enough said).
My particular offering to the list was Brussel Sprouts. They were nixed from my diet some time in my early teens. Their offense: aroma/consistency and preparation. They were always boiled...and boiled too long...long enough to reduce them to little mushy cabbages. (Apparently overcooking brussel sprouts also releases an organic compound that increases its sulfurous odor.) Well...fast forward to a few years ago at a little cafe in our town where I tried their much-touted, roasted brussel sprouts. They were crisp and flavorful...go figure.
Given this little epiphany, my point that evening was that it's good to give some of these foods another go. A different cooking method or seasoning may be all it takes to remove it from your I'll-never-eat-that-again list.
Coming across this amazing stalk of sprouts while at the market on a completely different mission, I decided to roast up a batch of these little buds, following what I believe this little cafe does with them. It's so simple you can hardly call it a recipe. Yet they turn out so beautifully roasted and crisp on the outside, and tender on the inside. Some of the little leaves are so crisp they're more like delicate little chips...so good. The seasonings are simple yet enhance this veggie perfectly. While I had them at this cafe with bits of bacon tossed in, I used turkey bacon for this preparation. And I sprinkled shredded asiago cheese over them...but think parmesan (a bit saltier) might be what I try next time. They keep fairly well but they are best straight out of the oven when they are at their crispiest.
I think it works to get sprouts that are a bit on the smaller side so that they brown up more quickly, crisping nicely on the outside and cooking through on the inside. (Sometimes the larger ones will crisp up great on the outside but still require more time to cook through.) Just remove the sprouts from their stalk (a gentle nudge with your thumb should pop them right off), or buy them loose. Cut off any remaining stem nib and remove loose or damaged leaves. Place them on a baking sheet, drizzle them generously with olive oil, salt, and pepper...and toss them to coat. (Since some of the sprouts at the top of this stalk were quite a bit larger than those at the bottom, I just cut the larger ones in half to get the sizes more uniform.) 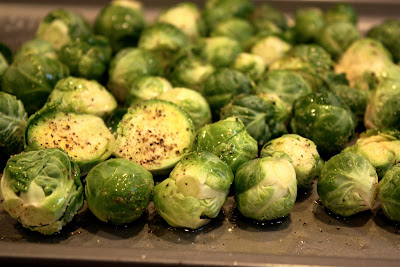 Place them in a 400 degree Fahrenheit oven for 25 to 35 minutes. Keep an eye on them toward the end to avoid overcooking, and give them a light shake or two while roasting to ensure that they brown more evenly.
While they roast, finely dice several slices of turkey bacon and transfer to a skillet over medium-high heat to brown up. Set aside. 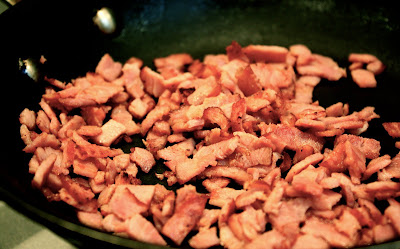 When your sprouts come out of the oven looking beautifully roasted, toss in your bacon and then transfer the whole lot to a serving dish and sprinkle with cheese... 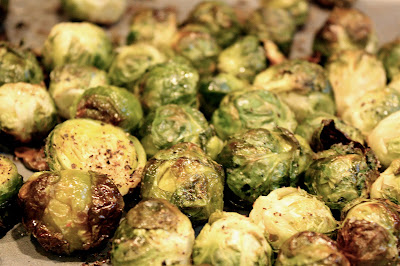 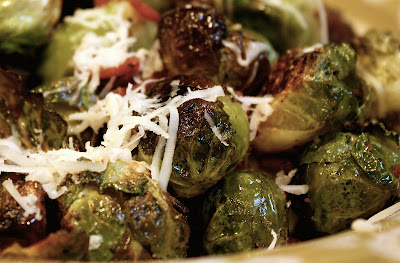